A Hen’s Day by Margaret Wilkes

It was such an ordinary day. Doris the hen awoke bright and early to the sound of one of the rooster’s loud calls ringing through the dusty, semi-dark air of the hen house. She looked up to see which rooster was onwake-up duty today. Sitting on the section of perch appointed to the holder ofthat coveted position sat Weird Al, his signature swing comb hanging off to oneside ever so slightly. Next to him sat his girl, the Barred Rock named Maxine, whose face bore a haughty look usually only sported by certain dignitaries.

Doris thought of the week before with much amusement as sheremembered when the juvenile rooster Bob was placed on wake-up duty. The son of a legendary and well-respected rooster named Ulysses, much was expected of Bob.  He had woken up far too early, due no doubt to the excitement of being on wake-up duty for the first time. He had let out a full volley of adolescent crows, much to the chagrin of his enemies and the horror of his allies. Everyone awoke, and a great tumult ensued, leading to his removal from the position. This was a grave mistake, because anytime the rooster on duty crows at the wrong time, a state of emergency has to be declared for at least 3 days. This is because the colony of humans, who they were so unfortunate enough to live near, may become angry, and theroosters’ very lives may be in danger. The bullying had got rather bad for poor Bob, it was true, and the talk about the nest-boxes was that he had evenconsidered going into exile at the Retirement Pen for Chickens nearby after his untimely disgrace. 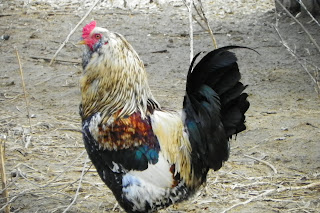 Perhaps that was why Weird Al looked particularly smug as he proudly carried out his duties without flaw that morning.  All of the chickens awoke, and with a shake of their feathers, they each began to make their way towards the exit of thehenhouse and began to get out one by one-first Weird Al and his lady Maxine,then a white rooster named Catullus, next an older hen named Phoebe, and on andon until at last they were all pecking merrily on the damp, springy grass. WhenDoris got out , she began her normal morning routine of preening and shakingout her feathers  and then pecking andscrounging for her breakfast. She tried not to make eye contact or get in theway of Maxine as she strutted about nearby, displaying her fine, fluffy blackand white plumage.

As Doris extracted yet another worm from its slimy tunnel, arooster standing nearby caught her eye. Feeling her gaze, the roosterinstinctively began to strut a bit more proudly and to groom and fluff hisalready perfectly coiffed white tail feathers. Doris turned demurely and beganonce again to search for grubs and worms along the green damp grass. Looking upa few moments later, with a grub hanging most unflatteringly from her yellowbeak, she was surprised to see that the rooster had moved a few steps closer.Clyde (for that was the rooster’s name) stepped a bit closer and winked. Then,with great deftness, he handily picked out a worm-big, pink, and juicy, fromthe ground. Then with a quick glance to make sure she was watching, heproceeded to slurp the worm down in an instant, with the entire left side ofhis beak closed off.

This, as you must have deduced, is the farmyard equivalentof that show-off elementary trick in which you drink a whole glass of milk,teeth firmly sealed, through a straw placed in a gap where a tooth used to be.Doris, perplexed by the rooster’s advances and embarrassed at the remembranceof how dumb she must have looked a few minutes earlier with the grub protrudingfrom her mouth, began a retreat ever so slightly, going slow, picking animaginary grub here and there, so that Clyde might not notice. Unfortunately,he did, and reciprocated by moving closer to her, hoping to intimidate her. Butshe would not be intimidated. Finally, his pride unable to bear this blatantrejection and apparent lack of appreciation for his supposed skills, hestrutted forward, frustrated. Doris sensed this and looked up, and for a momenttheir yellow eyes met. With a terrified squawk, the hen turned and ran fast asshe could away from him. Clyde, rolling his eyes, knows he can easily outrunthe hen, but he starts out slow to make the display more exciting for theonlookers, of which there were plenty. Hens, pecking contentedly nearby, lookup from their activity to watch the chase, heads cocked to one side. Otherroosters watch the scene and cluck approvingly, and Bob, the juvenile rooster,lets out his signature (now infamous) adolescent crow to show his approval. Notto be outdone, Weird Al lets out a loud, strong crow. Next, One Eye Jack giveshis contribution. Then, without a word, the game is on. The roosters alleagerly compete for the glory of Best Crow in Show. And who was the judge? Maxine,of course. 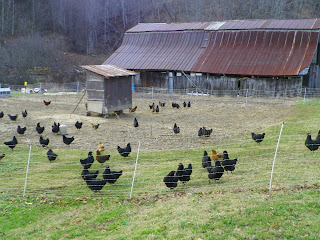 Doris runs, rushing past that flock of hens and blowing pastthe cacophony of crowing roosters. Clyde follows, getting closer by thesecond.  Another group of hens, asympathetic group of Gold Stars with a professional background in Psychologyand Poultry Relations, stand chatting by the flowerbed as the pair flies past.“Ah, poor Doris! Clyde’s just downright obsessed with her today!” They shaketheir wattles sympathetically and go back to socializing, this time turning tothe topic of the effects of excess buckwheat consumption on a rooster’sbehavior.  Studies they had read showedthat it can exacerbate a rooster’s obsessive nature. Aha!  Perhaps that was the reason for Clyde’srecent obsessive compulsive behavior s they had observed. 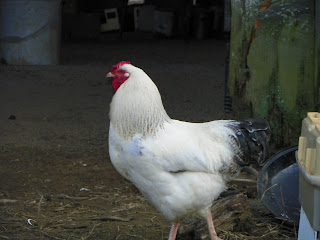 Doris is frantic, and running out of steam. She decides touse the one trick that had consistently worked well in the past- the RoosterDitch. She strategically ran through a part of the barn she knew the roosterswere generally not familiar with. The dim, early morning light would also aidher escape. Next she extended her lead as much as she could, and then, with afrantic dive, flew into a small corner room that was unoccupied, save for a fewpieces of plywood and old tobacco stick, which she hid behind as soon as shelanded. Pulse racing, she heard Clyde run barreling past, and on through thebarn. She had done it! She waited until her breathing had become normal, andthen she ventured back out. She felt sure Clyde would have gotten laughed atwhen he emerged from the barn alone and still running furiously after nothing,she had seen it happen many times. Happy in her success, she strutted out theback of the barn into the growing morning light and went back to her breakfast.It was a normal day, indeed.

One reply on “A Hen’s Day by Margaret Wilkes“